Being a 14 year old who's involved in the spiritual world is rough. But someone who can sense and hear spirits like I can it would probably be hard for them too. I've had lots of experience with the paranormal and I can personally say there is evil out there. But the evil that is out there is definitely over dominated by the good that's out there. There's actually a lot to know about the spiritual world that people don't know, and that's why most people do ghost hunts.
I've been asked several times if I have ever found the answer to mysteries  like "is there a Heaven or Hell", and I have had one answer to that question. I simply asked (on ghost box): "Say one if Heaven and Hell are two different thing or say two if They're connected together and is on Earth along with us." I got an instant response saying "two." But their are many other mysteries to be unveiled.  And they will soon be unveiled.
I've  also been  asked this particular question many times. They always ask me: "Have you ever came across any demonic spirits?" I always answer the same every time: "I have came across them in many ways, I've been scratched and growled at, but that's just about it." Most people don't understand that you shouldn't mess with demonic entities without help from a professional. I've said many times that if a demonic entity is in your household you need to contact a priest.
Some people say that it's too dangerous for a 14 year old to do what some people call ghost hunting. But I say that it's perfectly safe because I know what I'm doing when I do this because my aunt has taught me how to ghost hunt  and she's been teaching me since I was 10. I know all about equipment and how to fix it, I also know how to protect myself from anything ever following me home. I've never been in danger while ghost hunting and probably never will. The team and I usually ground and use prayers of protection and Saint Micheal's prayer  at the beginning and the end of all investigations to protect ourselves and the people who live there.
I personally think that going on investigations help people find out what they've been hearing and seeing is good or evil, and if it's evil we help them get rid of it. I really think that this is fun because when we go to historical places we learn the history behind what has been happening there, and we learn the story of peoples deaths. When you listen to evidence that you've received from an investigation it basically tells a story. A story that can either be heart breaking or happy. If you want to ever be on a ghost hunting team I would definitely recommend it. 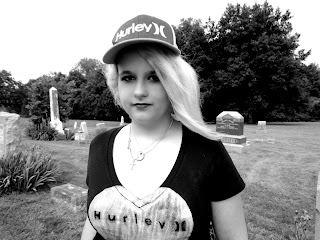 Above me there was movement. At about the same time a voice over the ghost box insulted a former acquaintance, there was the sound of furniture moving above me. Of course, my first thought was so stay put, but still I went upstairs. A skeptic doesn’t necessarily mean an unbeliever. It just means we need more proof than those who hear a knock or an exhaled breath. I don’t think I was always a skeptic. When younger I wasn’t a skeptic at all. Raised on Night Gallery and Scooby Doo, I believed in all things spooky and unsettling. I am convinced to this day that the voice I heard in the basement was real. I had a diorama to make for school, so a shoebox was needed, and they were kept there. My skeptical mind now knows that it was probably a squeak of floorboards from my grandmother moving about, but to a six year old the exhaled moan from the dark corner of the basement signaled something evil.

A mask revealing Old Man Withers who ran the haunted library pulled off by Shaggy? No. It had to been a dead relative from beyond the grave. Scooby Doo lessons be damned.So what happened between that boy who believed in it all and the man listening to the drag of furniture above him? I suppose a lifetime of religion squeezed into 30 years did part of it. While I’d never disparage my upbringing and my faith or it’s influence on the man I am, it’s still hard to reconcile its influence on my believe in the paranormal and the skepticism I feel at times. Perhaps that comes with all faith, the skeptical way it all comes down. I was raised in a very paranormal religion with heavy spiritual connection that translated into lots of speaking in tongues, slain in the spirit passing out from the influence of the Holy Spirit. I never really bought into it much probably because of my initiation into it via a family trip to a place called Christian Retreat. During the children’s church portion, I was surrounded by children and the leader and told to repeat a phrase that sounded a lot like the hook from “Lady Marmalade.” Still the constant exposure to the supernatural via church services twice on Sunday and once on Wednesday nights kept me immersed in this spirituality that was real. My modern influence on the supernatural was my introduction to ghost hunting shows and how phony they seemed. And how real they seemed as well. The natural explanations these shows used to explain the reality in order to narrow down the supernatural, that’s where it was. A little research and a few meetings later, I was a part of a team.

Walking upstairs was terrifying, but at the same time I knew that answers to my skepticism were somewhere up there with the moving chairs or what is a table. It was hard to tell amidst the commotion and ghost box downstairs static and DJ snippets. The voice coming through was threatening, using very harsh language towards women. No one was upstairs. I led the way. The room. Cold. It had a feeling, but as a skeptic I must discount certain emotional reactions to creepiness. The only sound was from the radio static and questioning still going on downstairs. A flashlight crosses the room. I ask, “Is there anyone here with us?” Silence. Nothing. “Hello?” I sweep the room again. Chairs and tables. A crate next to two cardboard boxes full of papers. “Was that you downstairs, your voice calling-“ No more silence. A chair moves into the edge of my flashlight and all of those lessons from Scooby-Doo come into play. I levitate into the air, run in place, and poof- all that’s left in the room is a cloud of dust. No skepticism tonight. This place is haunted.
I guess this was needed. My place in an awesome group who listen for the bumps in the night and the voices coming through the static. This guy who says, “Ok. Let’s step back. Think about this. What else could it be?” I love my spot in this new team. I’m excited for what will come. The ride will be a lot of fun, and I look forward to sharing it with all of you. Skepticism and all.
Posted by Kansas City Paranormal at 5:36 PM No comments:

Do you believe in supernaural occurences and hauntings?